Welcome to the Fault Detection in a 3D Seismic Volume Marathon Match! Our client has interests in geophysics research, and it approached Topcoder with the following problem related to automated analysis and interpretation of 3D Seismic data. 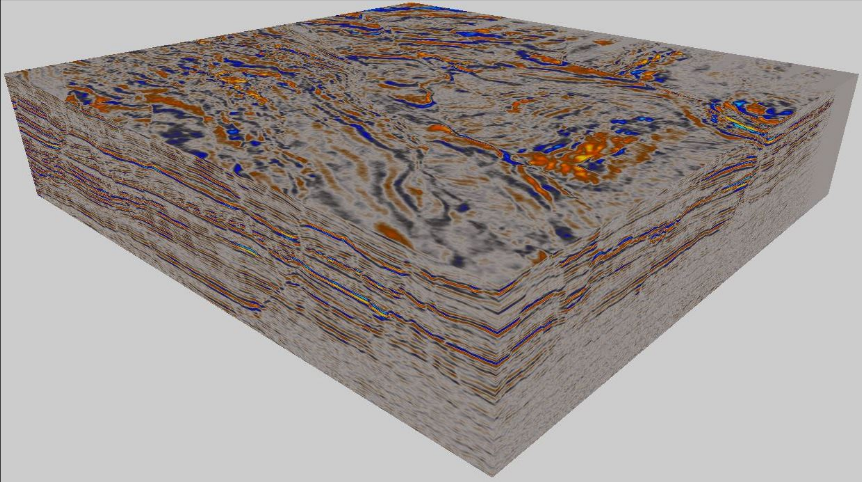 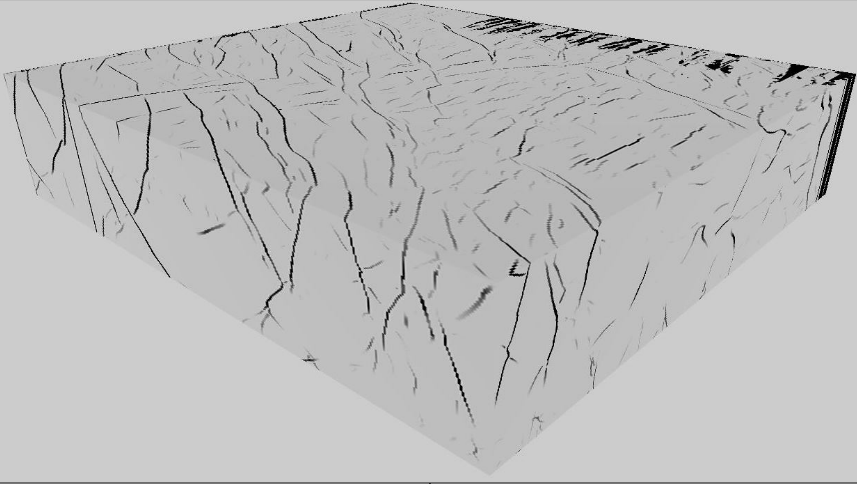 Figure 2. A 3D Fault Likelihood volume calculated from the raw 3D seismic data displays at each point the likelihood that the point lies at a fault. Bright colors (most of the volume) represent low probability, and the dark colors represent high probability of a fault. Seen together these points image fault planes found in the original data. Fault likelihood volumes are the input to the problem we want solved.
As you see from the illustration, most of the dark points are arranged into planes cutting through the surface slab, and possibly intersecting each other. The goal of this project is to come up with an algorithm that automatically recognizes fault planes.

Figure 3. Manual extraction of fault planes. An expert visually examines cross-sections of 3D Seismic (as in this illustration) or a Fault Likelihood volume, and marks by “fault sticks” the lines where a fault crosses the cross-section. The fault plane is then triangulated based on the positions of corresponding sticks in a series of cross sections.

Recently we ran the ideation challenge about this problem. In this MM forum you will find three winning solutions from that challenge, which you may use as the starting point of your work (this is not obligatory though).

Also in the match forum you will find the local scorer code, training inputs and ground truths, and an example submission (more details below). In addition you may find useful the following resources:

The input of your algorithm will be a set of SEG-Y files, each containing a single 3D Fault Likelihood volume. For each input SEG-Y file you will create a folder of the same name and output there a number of 3D meshes describing fault planes detected in the corresponding SEG-Y file, one mesh per output file.

The mesh file format is a text document with a list of vertex coordinates, followed by a list of triangular facets. Vertex and facet indices are 1-based, and corresponding lines are prefixed by VRTX n and TRGL labels, e.g. the following mesh describes a unit cube in XY plane, formed by two triangular facets:

The mesh files may contain any other lines (the training ground truth files do), and for the purposes of this match any lines beside vertex and triangle coordinates are ignored.

All input files have been generated randomly. Within some reasonable limits the generator selected the size of 3D volume, the number of “planes” to drop into the volume, the size and the curvature of each plane. It dropped these planes into the volume, and then transformed the resulting structure into an artificial 3D Fault Likelihood volume assigning probabilities ~1.0 to the grid points located on and near the planes, and ~0.0 probabilities to all other grid points. It also output the original planes as the ground truth meshes.

The important point is, although we call the fault planes as planes, they don’t have to be planar on the global scale! They are planar locally, but may bend on a larger scale. See images for examples. Another important point is that planes may, and will often intersect each other, and your algorithm is expected to nevertheless trace and segregate individual planes, and output them as separate mesh files! The following images show a randomly generated dataset as a combination of generated fault planes, and also as a cross-section of the resulting SEG-Y file: 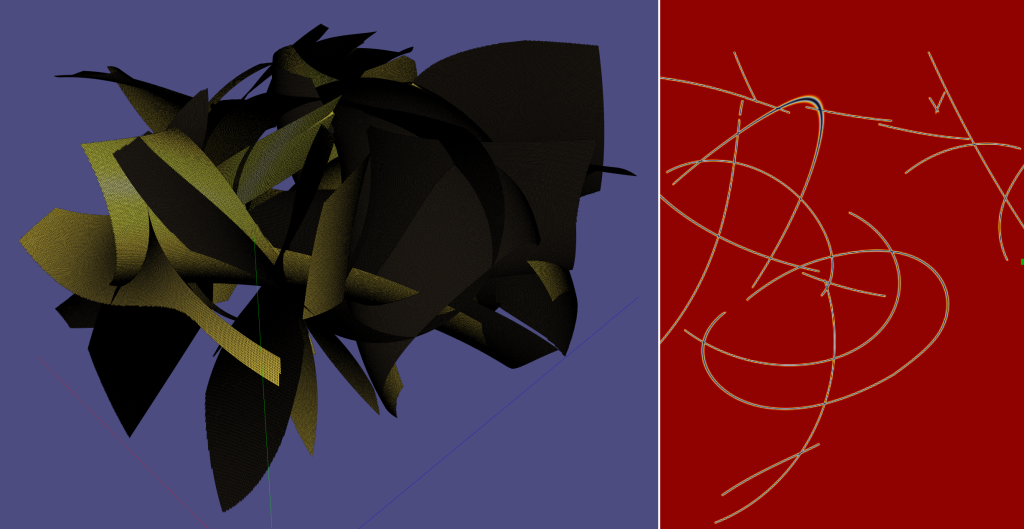 You will submit a dockerized version of your code, i.e. the source code along with Dockerfile, placed inside a folder named code, and ZIPed so that the code folder is located in the root of the resulting archive (example submission is provided in the challenge forum). Topcoder system will build it and run the resulting Docker container with input and output folders mounted as local paths inside the container, and their local path names passed in as two command line arguments, i.e. the container will be run like:

The specified input folder inside the container will contain a set of input SEG-Y files, e.g.

For each input file you’ll create a folder with the same name inside the specified output path, and write into it detected fault plane meshes, i.e.:

It does not matter, how you call individual mesh files: the scorer will read all files in each folder, and assume that each of them contains a single mesh.

A few additional points to consider:

Given a set of folders with meshes output by your solution, and the corresponding ground truth data, the scorer will evaluate your solution in the following way.