Last weekend we hosted our first ever TCO17 Regionals in Europe in Warsaw, Poland. Also it was also the first regional TCO where we had a Lightning Marathon Match as a part of the regionals. The Marathon Match had started 72 hours before the regionals but members had to be onsite to get the prize.
Because it’s Poland – the main competition of the event had to be the Algorithm Round. The Algorithm round at regional TCOs provides an amazing and a two step chance to fly to the TCO17 Finals and compete for the trophy.
The event was held at Faculty of Mathematics, Informatics and Mechanics, University of Warsaw. It is the university that has produced 2 TCO Champions and some great competitors over the years thus the venue was perfect to host the first ever regional in Europe.
Big thanks to claygirl for helping us do an event in Poland. 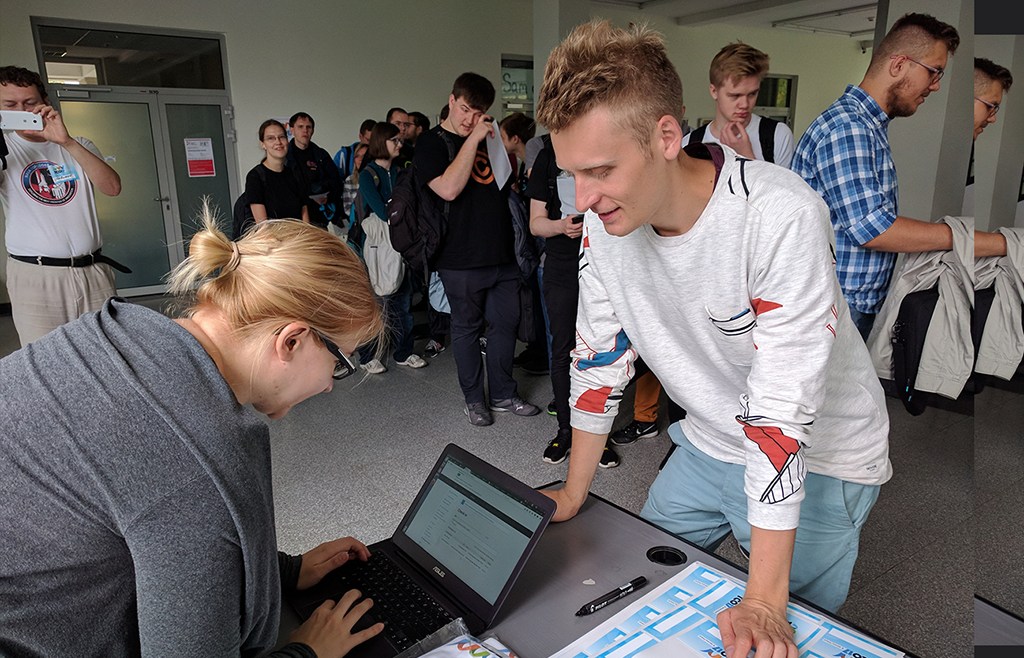 The event was to start at 1:00 PM but we could see some members reach the venue well before that. The regional gave a chance to many old Topcoder Competitors in the region to come and compete onsite. A lot of them donned their Topcoder T-shirts from ‘07,’08 and ‘09 which was great to sight to watch.
Snacks and drinks were arranged for the members and we could see the members mingling and meeting each other during that time.
By 1:30 the registrations and T Shirts were done and we were all set to officially begin with the event. The official welcome was done by me (Harshit Menta) and I did not miss a chance to congratulate and thank the members for making this community such an amazing one.
The official welcome was followed an amazing session by marek.cygan on deep learning. He spoke about what is the current status of the AI and how the researchers are trying to bridge the gap between reality and the training dataset, so that the machine can react well to the real situations. 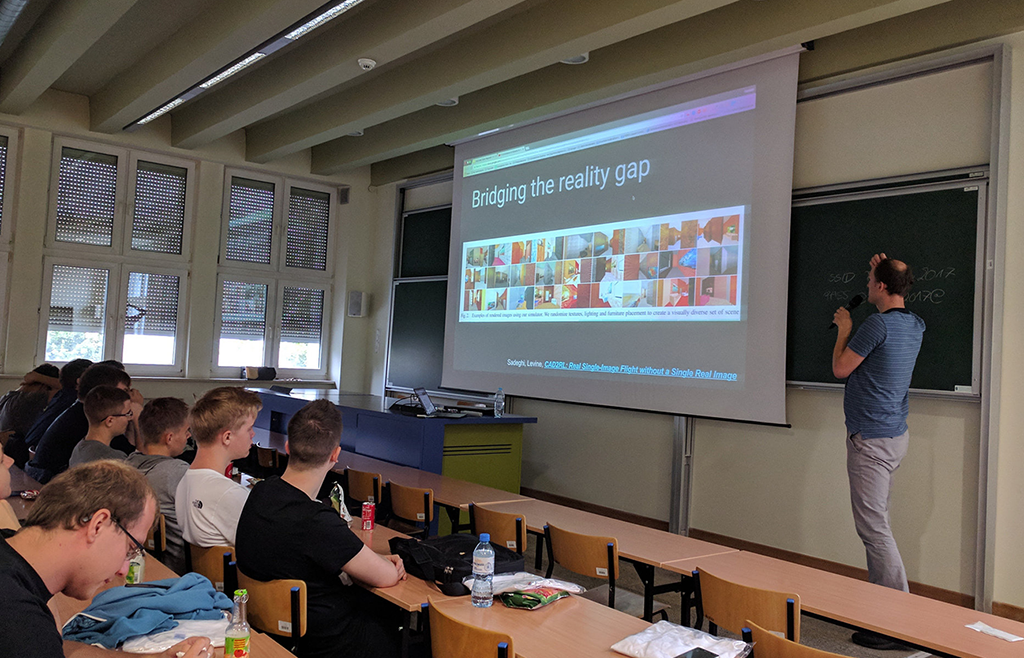 The amazing interactive session ended somewhere around 2:30 and it was time for SRM!
Members quickly grabbed the snacks and drinks and moved to the arena rooms where they could sit and code peacefully. 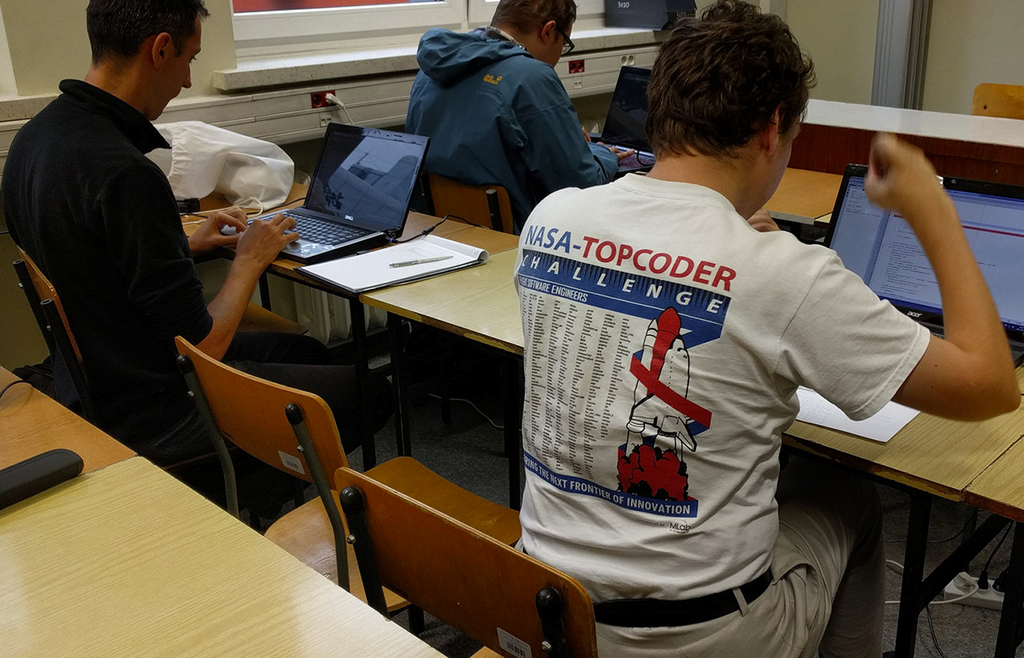 The Algorithm competition had an easier set of problems than we usually see in Div 1 these days. It resembled me the old times when every participant could understand the solution to all the 3 tasks in the harder Div.
9 participants passed the system tests on all the tasks, with tomekkulczynski, Pol-BoBaN and Marcin_smu on the top (in this order).
In the EllysChocolates, one can simulate the process, given the constraints from the statement. The key observation is that once you purchased chocolates in the first iteration, the remainder of euros cannot be used anymore. The wrappers are the new currency from this moment. One should accumulate wrappers between iterations, though. Refer to Pol-BoBaN code for a clean implementation.
EllysCode01 can be solved as follows. First, observe that each pair of consecutive even and odd index sums up to exactly 1. The remainder of the task is to find the value at a given index for the borders of the range, in case the range does not start from even index and ends in odd index. See my implementation for exactly this, or tomekkulczynski code for a little different, but much shorter approach.
For EllysRollerCoasters the actual solution may be shorter than the task definition, so I just refer to the solution of monsoon. 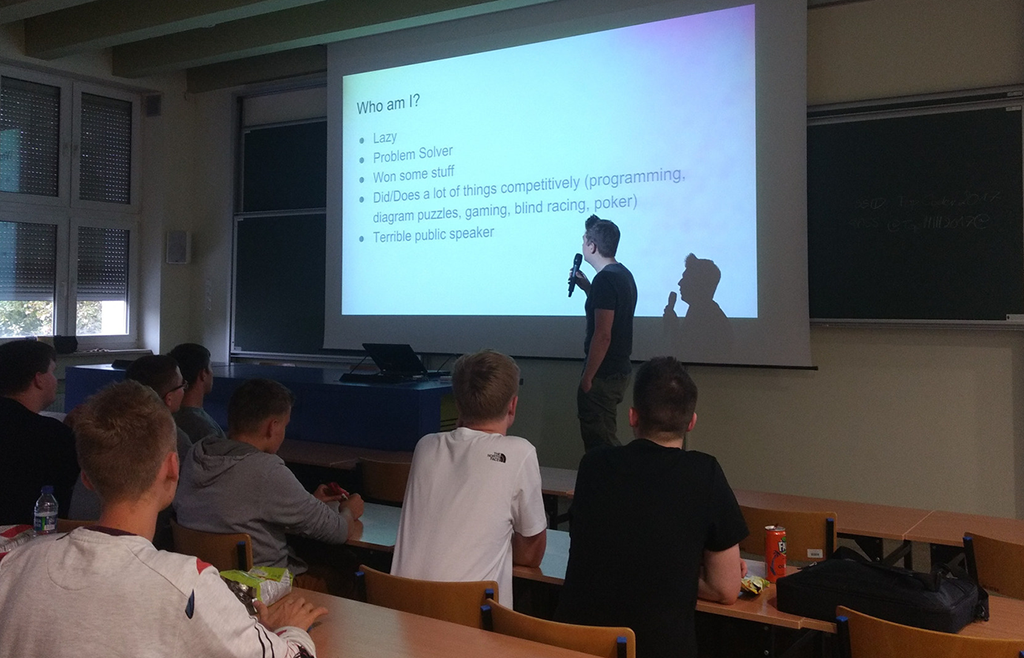 After the contest we had our TCO Marathon Champion, Psyho, discussion about the life and questions. He discussed something great about the approach and how you should look at problems and understand the problem first and just not worry the solution.
It was time for the results and we didn’t waste much time to make people wait!
The results were announced! But that was not the end of the day!

It was time for members to relax and enjoy. Thus an after party was organized at DiSCO VR cafe. A gamers cafe with some amazing VR Games, Pizzas and Drinks.
It was great to see the members collaborating and enjoying the games! Personally it was a great experience playing the VR games too!
To sum it all it was a great day with amazing sessions, competitions and yes not the forget an amazing after party with the VR games! 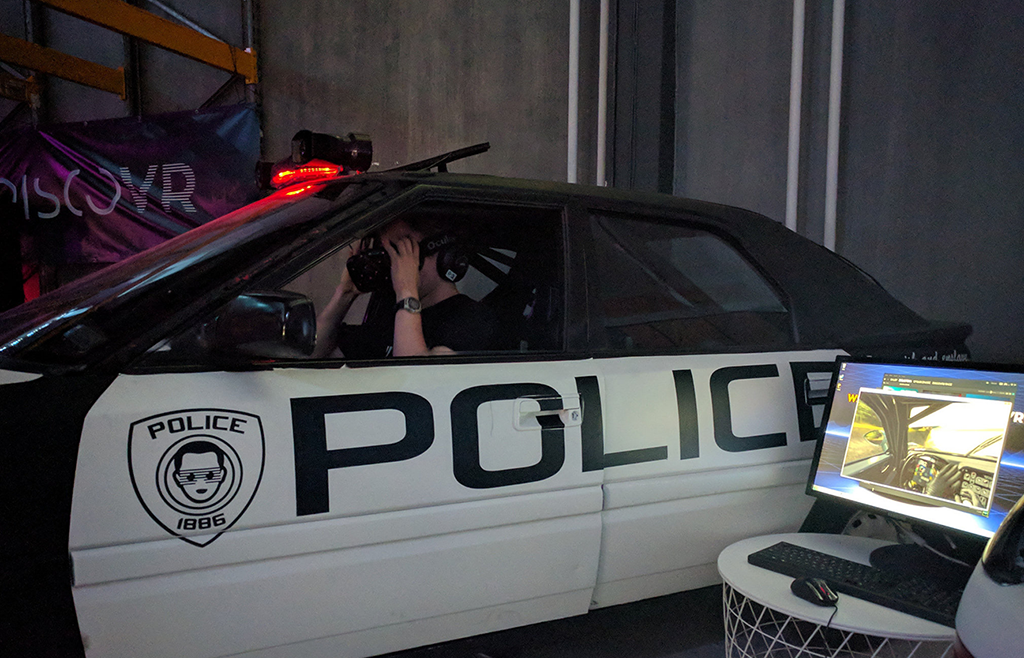 Do check out the pics!