There are no prizes for this challenge.  It is being hosted for educational purposes only. 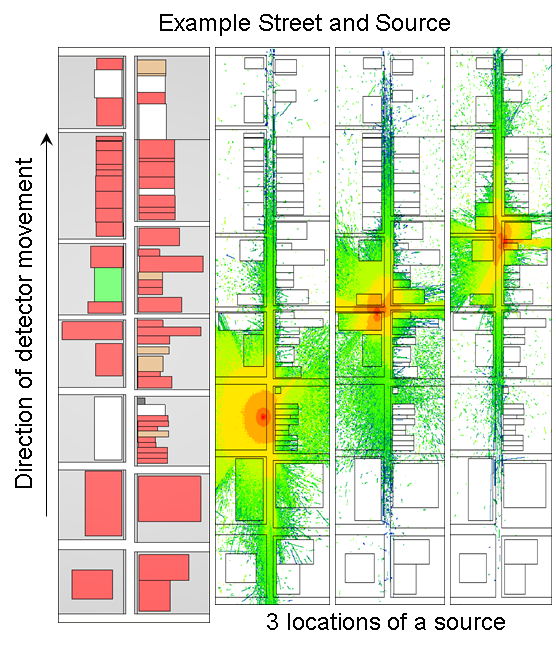 
The United States government routinely performs radiological search deployments to search for the presence of illicit nuclear materials (like highly enriched uranium and weapons grade plutonium) in a given area. The deployments can be intelligence driven, in support of law enforcement, and planned events such as the Super Bowl, presidential inaugurations or political conventions. In a typical deployment, radiation detection systems carried by human operators or mounted on vehicles move in a clearing pattern through the search area. Search teams rely on radiation detection algorithms, running on these systems in real time, to alert them to the presence of an illicit threat source. The detection and identification of sources is complicated by large variation of natural radiation background throughout a given search area and the potential presence of localized non-threat sources such as patients undergoing treatment with medical isotopes. As a result, detection algorithms must be carefully balanced between missing real sources and reporting too many false alarms. The purpose of this competition is to investigate new methodologies in detecting and identifying nuclear materials in a simplified search mission.

For more information on the search mission, see https://www.energy.gov/nnsa/nuclear-incident-response.

For this competition, we have used Monte Carlo particle transport models (see scale.ornl.gov) to create thousands of data files resembling typical radiological search data collected on urban streets in a mid-sized U.S. city. Each data file – a run – simulates the pulse trains of gamma-ray detection events (amount of energy deposited in the detector at a given time) received by a standard thallium-doped sodium iodide – NaI(Tl) – detector, specifically a 2”×4”×16” NaI(Tl) detector, driving along several city street blocks in a search vehicle. Gamma-rays produced from radioactive decay have a characteristic energy which can be used to identify the source isotope (https://en.wikipedia.org/wiki/Gamma_ray). All of the runs contain data on radiation-detector interaction events from the natural background sources (roadway, sidewalks, and buildings), and some of the runs also contain data arising from non-natural extraneous radiation sources.

The event data created for this competition is derived from a simplified radiation transport model – a street without parked cars, pedestrians, or other “clutter”, a constant search vehicle speed with no stoplights, and no vehicles surrounding the search vehicle. In fact, the search vehicle itself is not even in the model – the detector is moving down the street by itself, 1 meter off the ground. The energy resolution is 7.5% at 661 kilo-electronvolts (keV).This simple model provides a starting point for comparing detection algorithms at their most basic level.

The runs are separated into two sets: a training set for which a file with the correct answers (source type, time at which the detector was closest to the source) is also provided, and a test set for which you, the competitor, will populate and submit an answer file for online scoring. For each run in the test set, you’ll use your detection algorithm on the event data to determine 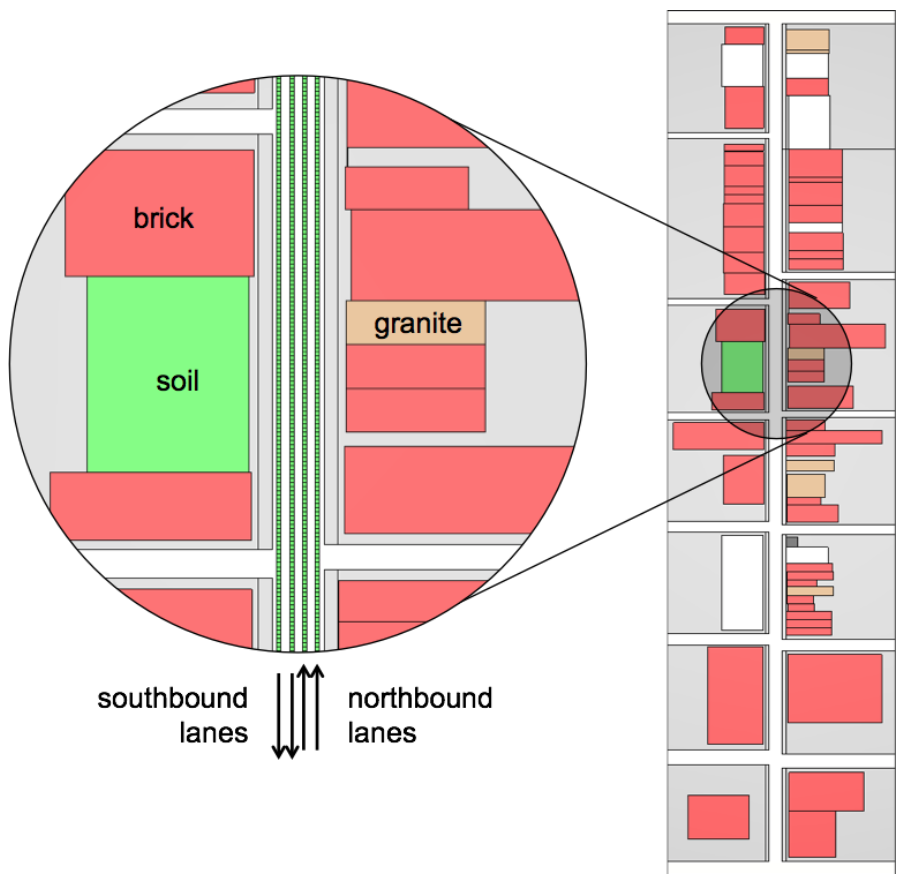 For the competition we have generated data from thousands of runs that mimic what would be acquired by a 2”×4”×16” NaI(Tl) detector moving down a simplified street in a mid-sized U.S. city. Each run has been designed so that no source is located within the first 30 seconds of measurements, though the first 30 seconds could include events associated with gamma rays arising from an extraneous source located farther along the street.

In a real urban search scenario, you would be able to see the general layout of the street as the detector moves along. A notional diagram is shown in the figure, though the exact street geometry for each run will be different (and unspecified). Buildings made of different materials (red, beige, and dark gray) occupy most of the space along the main street, with a few asphalt parking areas (white), and grass-covered park areas (green). The main street (also white) has four travel lanes, two in each direction, and several cross streets. Travel lanes are each ten feet wide and there is at least ten feet of sidewalk (gray) between the outer travel lane and the building facades. Detector paths are all within one of the four main traffic lanes – with no lane switching and no turning onto the cross streets.

The set of data for a given run mimics what a detector would see in real time: a list of pairs, each comprising the time at which a gamma ray interacted within the radiation detector and the corresponding energy the gamma ray deposited in the detector. Times are in microseconds (µsec, millionths of a second) since the last event, and the deposited energy is in units of kilo-electronvolts (keV). The time recorded for the first event in each run will be zero. Your algorithm can bin the data into any time and energy structure that you find beneficial.

For each run, several characteristics are fixed a priori:

If a source is present, the following characteristics are also fixed: Another concept we consider is standoff, the distance of the source from the nearest approach of the detector. Standoff is a function of characteristics 1 (lane of travel) and 7 (location of the source along the street).

Note that the runs in the training set and the runs in the test set are all drawn from the same 7-dimensional input space based on the 7 characteristics above. However, the emphasis of each set varies. Recall that the test set runs are divided into those used to calculate your provisional score while the competition is running (42%) and those used to calculate your final score at the end of the competition (58%). The training runs span the full input space relatively evenly, while the final score test runs emphasize the more challenging regions of the input space. The provisional score test runs lie somewhere in between in their emphasis.

If a source is present in a run, it will be one of six types:

Energy spectra for each source type are shown below for a significant quantity of source types 1 and 2 and 1 microcurie (μCi) for source types 3-5. In each figure, the solid curve shows the unshielded spectrum while the dashed curve shows the spectrum with 1 cm of lead shielding. The plots show sources 1 meter away from the center of the detector in a vacuum. 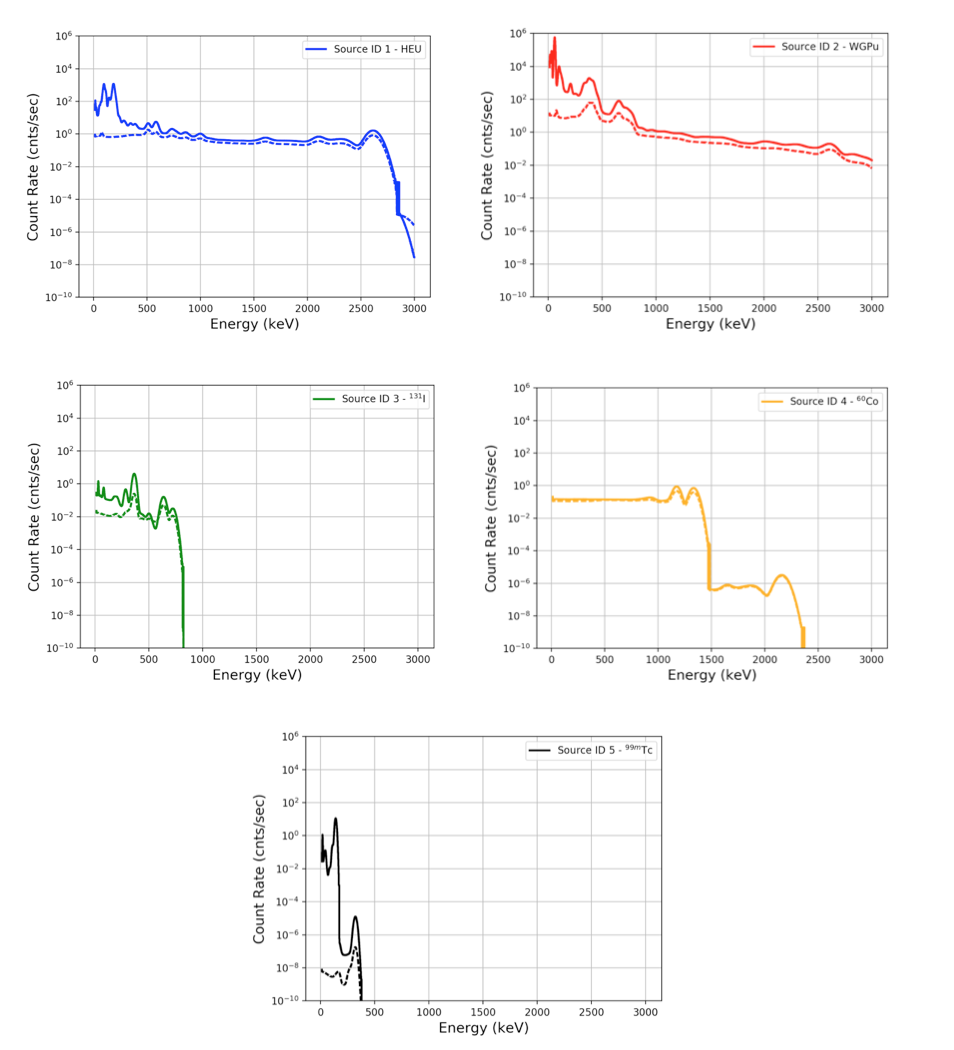 The data that generated these figures are included in the data for download in the file sourceInfo.zip.

The events for each run (one instance of a detector traveling down a street) are contained in a run file named with a unique run ID number. Each run file contains a list of radiation detection events, one event per row. Each row gives the time in microseconds since the previous recorded event and the deposited energies of this event in keV. For the first event in each run file, the time since the last event is recorded as 0.

For the training set, the answers file contains the correct answer for each run file in CSV format. Each row of the training set answers file gives an identifier for the run (RunID), an identifier for the source type (SourceID), and the time in seconds, reported to the nearest 1/100 of a second, at which the detector was closest to the source (SourceTime), sometimes referred to as the time of closest approach. For runs without an extraneous source (background only), SourceID and SourceTime are 0 and 0.00, respectively.

In the example training set answers file, the first row is for run number 100001, which, like runs 100002 and 100003, had no extraneous source present (0 for SourceID and 0.00 for SourceTime), while the fourth row after the header is for run number 100004, which had source 1 (HEU) present at a location that was nearest to the detector 65.58 seconds after the start of that run.

This competition uses the result submission style, i.e., you will run your solution locally using the provided files as input, and produce a file that contains your answer. Note that only your first 300 submissions can be considered for final rankings for prizes. If you make more than 300 submissions, the later submissions will be scored as part of the provisional leaderboard while the competition is running but will not appear in the final rankings.

Your output must be a CSV file with the same format as for the training set answers file above. The name of your submission file must be solution.csv.  Your submission file must be placed in a directory named "solution".  Your submission zip file should contain both the solution directory and the enclosed solution.csv file.  You will fill in the SourceID and SourceTime fields of the answers file for each run in the test set and submit the entire file for scoring. If any of the entries for any of the runs is left blank, or contains inadmissible entries (e.g., listing a SourceID of “7” or a negative SourceTime), the score will not be generated when that submission is processed. Likewise your score will not be generated unless your answers are sorted by RunID. You should zip your solution.csv folder before submitting it to Topcoder.

Keep in mind that your complete code that generates the results will be verified at the end of the contest if you achieve a score in the top 10, as described later in the “Requirements to Win a Prize” section. That is, participants will be required to provide fully automated executable software to allow for independent verification of software performance and the metric quality of the output data.

Scores range from 0 (worst) to 100 (best) and reflect your success on each of the three components: detection, identification, and location.

Let B be the base score and p be the unit of possible penalty (arbitrary scale). Your score is set to B points and then it is modified according to these rules:

Since it is critical for a working detector not to have too many false positives, runs containing no sources contribute more to your score than runs with a source.

The provisional leaderboard rankings will be based on your scores for approximately 42% of the runs in the test set. This will be updated each time a competitor submits an answers file during the competition.

An offline scorer is available here that you can use to test your solution locally. It calculates detailed scores based on your output file and a file containing ground truth annotations.

Submit a zipped solution directory containing a solution.csv file in the format described above to test your solution and receive a score.  It will be posted to the leaderboard.

There will not be a final evaluation phase or prizes paid for this challenge.  The challenge and the corresponding data sets are being hosted for soley for educational purposes.