We have a large manufacturer of telecommunication equipment that writes all their firmware in ANSI C.   Over the years that have amassed large volumes of C code, some of which is used and some of which is not, yet it still contains useful code snippets.   The problem they are facing is that we new developers come on board they a facing a sea of firmware that does not contain any documentation other than comments.   They are looking for a tool that can generate reverse engineering design documents from a given C source code. The design document should contain various modules along with their interactions, finite state machines and other high level design details.

In a previous challenge we have developed a tool to parse the project, traverse the call tree and generate all kinds of call graphs. The call graphs generated are not too useful as they contain extremly large number of nodes and we didn't apply any useful layout algorithms to make them look better.

In this challenge we'll refine the call graphs to get some insight into the code structure. Specifically the goal is to get the following:

We’ll keep the assumptions about the project code structure from the previous challenge. Top level directory contains just the build/configuration files and has no c code. It also contains a number of directories that represent modules of the project and they contain the actual .h and .c files. There are two opensource projects we can use as examples in this challenge: Quagga and Openswitch

With the code from the previous challenge we can get a call graph for a module with './call_graph.py ./quagga-master/bgpd quagga-bgpd.svg' and the resulting graph looks like this 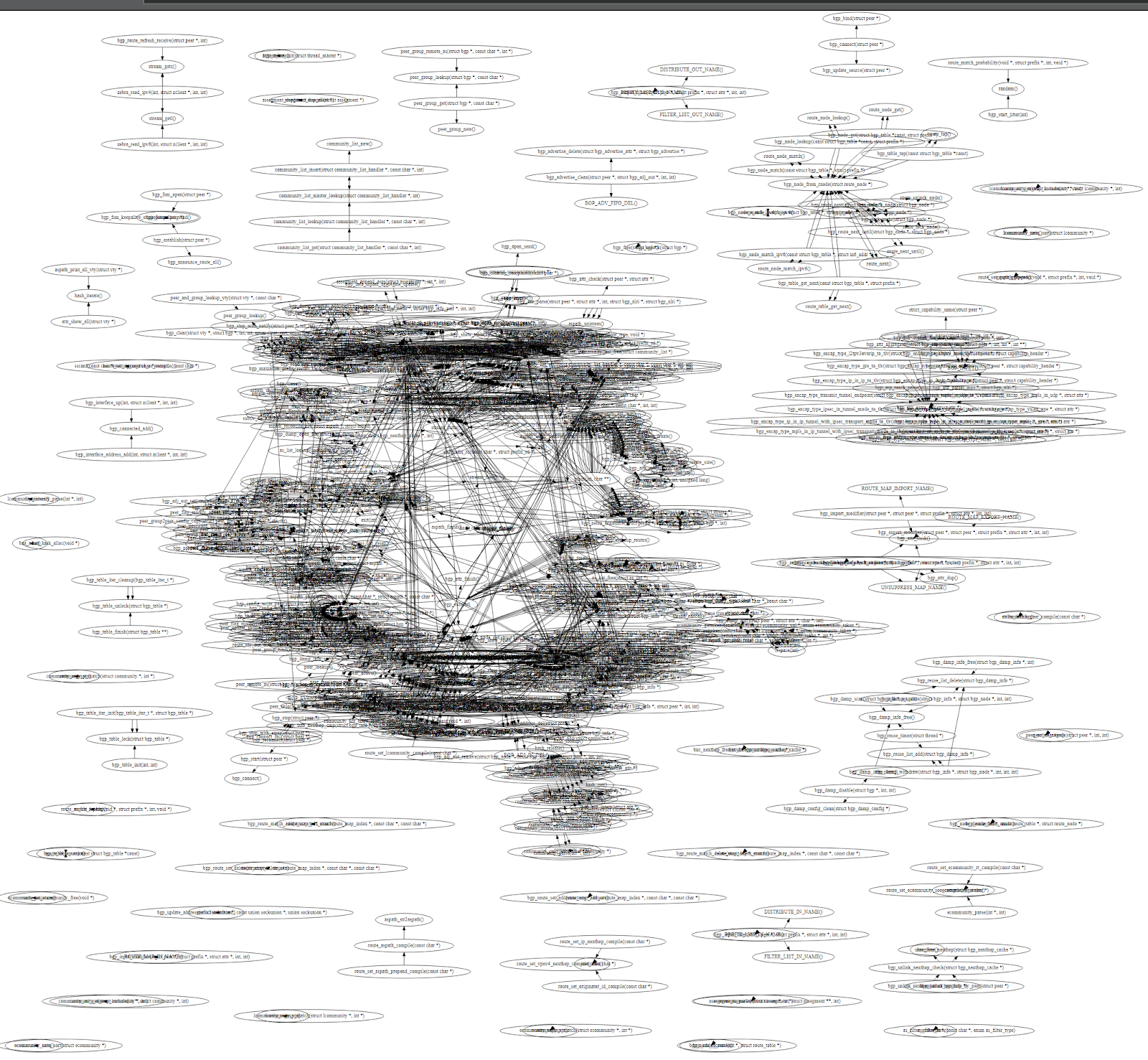 In order to keep just the most useful data in the graph any try to get the overall structure, we'll use PageRank algorithm to rank the functions(nodes in the graph) and produce the output graph containing only the high ranked nodes. The threshold for keeping/discarding graph nodes should not be fixed because number of functions and their interactions varies a lot between different modules so a threshold that's good for one module might be way off for a different one. Implement a simple heuristic to determine the appropriate threshold and verify it on quagga and ovs modules.

- inter-module call graph where we'll only show functions that call functions from other modules. For example if module A has a function f1 and module B has a function f2 that is called by f1 the graph should contain nodes f1 and f2 with an edge from f1 to f2

To construct the above graphs you'll need to traverse the parsed AST and select the appropriate functions. Take a look at call_graph.py for an example selecting only functions from a single module.

You can check 'example_data_types.py' as an example for finding data structures in a module, but it won't provide any info about where that structure is used (that part should be developed in this contest)

Create a command line tool that will accept just one argument: path to the project folder. The tool should create a HTML file containing the above views. Use a simple bootstrap based layout with placeholder header and footer. The page content should have 2 tabs: 'High level overview' and 'Module details'

Module details view will be more like an api docs page and will have the following:

Please use some templating engine for generating the page contents.

The code from the previous challenge is attached in the forums. You don't have to use it as base code, but you should reuse the parts that parse the project code and traverse the AST.

Improve code docs and generate doxygen documentation
In the first ideation challenge in this series we got a suggestion for using Swummary module for generating code docs for the project. It will basically go through the project files and fill in the missing comments based on menthod/variable names. You should just run the module on the sample projects and generate doxygen documentation based on the output from the swummay module. Make sure to cover this in detail in the deployment guide.

Submit all the code in a zip archive.
Submit a build and verification guide.
Submit the output your tool produces on quagga and ovs projects.