My day typically starts with an early morning chat. I’m either on calls with my India team or virtually chatting with them about updates and statuses. Around 6am my time is when they are winding down for the day.
Then I check in with my Topcoder copilots from the Philippines and Romania to see what I have missed overnight. I follow up with my colleagues in Japan and respond to requests that have come in while I slept from many other corners of the world.
Though my little home office is in one of the smallest states in the country (Connecticut), my virtual office is worldwide and humongous.
By working with people from many countries and cultures, I’ve learned quite a bit. Different holidays, religions, languages, and more. The perks of being part of the Topcoder Community never ceases to amaze me.
I’m not focused only on my time of year, my time zone, or my country’s traditions, but also on those of many other countries. I use 24-hour time format, I tend not to refer to “today” or “tomorrow,” and am keenly aware that though it may be snowing at my house, it may be ridiculously hot in places I’m corresponding with. As part of the Topcoder Community, it’s in my best interest to be globally friendly and it’s simple consideration as well; there is a world beyond the USA!
It’s with these wonderful things I’m learning and practicing that I’m raising my children. My eight-year-old daughter asks about her “friends” from Topcoder all the time, with questions like “What time is it in China right now?”, “Is my friend in Romania eating dinner right now?”, and “Is it raining in India too?”. I love that I can easily ask these members a question or show her the differences on a map.

My daughter’s school, I’m proud to say, is very multiculturally represented. We once had a group of kids playing that represented direct heritage from: England, Turkey, Lebanon, Puerto Rico, China, India, and the Americas. It’s a great feeling as a parent to know that your child is immersed in so many different cultures every day.
For my daughter’s second grade class, part of their curriculum has been about learning their heritage and about different cultures around the world. When I heard that this was part of the curriculum, I raised my hand — cue Topcoder.
One kind message was all it took to a few of the Topcoder members I work with on a daily basis — that my daughter’s class would love to have a Google Hangout to learn more about their country and culture.
A week later, all of the second graders at Flanders School in East Lyme, Connecticut, gathered into one classroom where Luis from Venezuela (living in Paris), Seeta from Indonesia, Alex from Venezuela (living in Chile), Harshit from India, Thomas from Greece, and Honghao from China were gathered on a Friday night their local time. Through the video Hangout, they shared their country and favorite foods. They talked about cool things to see in their country and answered questions the students had. Some of the students even spoke native languages with the virtual guests. We discussed the length of the Great Wall of China, favorite desserts, and about the movie Up and its relevance with Venezuela. 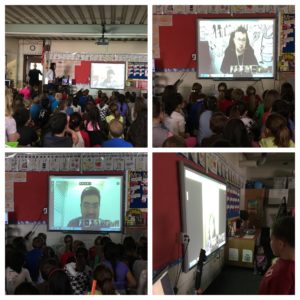 The Topcoder members who chatted with the students thanked me for inviting them and being a part of the Hangout. It was their free time they shared with us but were grateful to share about their country and culture. The students and teachers really enjoyed listening the members as well.
After helping MC the chat, I sat there in awe of what had transpired. Connecting children from one small corner of the earth with amazingly talented folks from other corners of the earth was truly gratifying.

When you work with people day in and day out, you consider them your colleagues regardless of whether you’re working at the same company. When you work with a community every day to create awesome projects, to support one another, and help one another, you’re not officially colleagues, but you are friends — family even.
I’ve been a part of the Topcoder community for 13 years, and over that time many of my colleagues and community members have become my family.
It’s a pretty amazing feeling to have this family all around the world. They are there virtually to chat with all the time and bounce ideas off of. Plus they are there when I want to share their wealth of global knowledge with my children and their school.
People travel far and wide to get to know people and different cultures. I don’t know how many people out there have the privilege of doing that while working from home. Every day I get to learn something new, and share it with people I know. The Topcoder Community is changing lives for the better, always.