On March 31, 2019, I had the privilege of attending one of my favorite events of the year: The Young Inventors Program in New Hampshire. The event is part of the Regional Invention Convention at Southern New Hampshire University. Designed to encourage young minds to think outside the box, this program invites young inventors to create inventions that solve real-world problems. This year, over 270 kids in grades K-12 showed up to share their inventions with other people in the region.

Topcoder and the Young Inventors Program 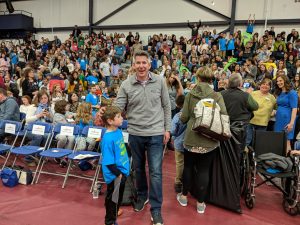 My wife and I first learned about this event when our daughter, Lana, participated back in 2015. I was in awe as I watched my young daughter put in hours of dedicated work. From brainstorming to designing, Lana worked tirelessly on the “Pro Desk 2015.” When my wife and I arrived at the 2015 Young Inventors Program, we were blown away to see that Lana was among like-minded peers. All of these children were willing to put in the same amount of hard work in order to create something new. Talk about an inspiring peek into our future!
I strongly believe that encouraging children to explore their imaginations and intuitive skills is crucial to their development. Beyond that, encouraging them to create new things will ultimately make the world a better place. During the creation process, children experience growth along with the acute excitement of success and the disappointment that accompanies failure. Failure is scary for a child, but it is through their mistakes that these young inventors learn and persevere until, finally, they produce something extraordinary. It is this process that enables them to learn the life skills that will transform them into a productive and diligent adults.
The excitement in the air was palpable. I saw children’s faces lit up with pride as they shared their ideas and collaborated with their peers. I also saw critical thinking and problem-solving that would impress me from the mind of an adult. Almost immediately, I knew Topcoder had to take part.
This year, I was honored to acknowledge the innovative achievements of three talented students by presenting the Topcoder Disruptive Innovation Award.

Before we talk about the winners, let me say that every entry blew me away. Every child explored a problem that was important to them and channeled their creativity (and today’s technology) into viable solutions.
A high school student created an iOS app that allowed teachers to scan their students’ test and calculate their scores in an easier and more efficient way. I also saw an elementary school student create a tablet called the “GUTAB” that gives kids a fun and engaging reason to take a break from their smart devices and interact with the real world.
All of the inventions were impressive. However, when I considered the candidates for the Topcoder Disruptive Innovation Award, I was looking for something specific. I wanted to award inventions that would have an impact on millions – if not billions – of people.
These are the three inventions that I felt could make the biggest impact on society:

Katerina created a method to automatically water plants. She invented a full system that came complete with a watering pump, sensors, and a keyboard that allowed you to input your phone number into the computer system. Why, you ask? Well, Katerina’s automated watering system doesn’t just water plants… It also notifies you (via text message) when the system needs more water as well as when the fruit or plant is ready to be picked and harvested. Katerina’s invention will one day be able to help many people in the farming and landscaping industry. 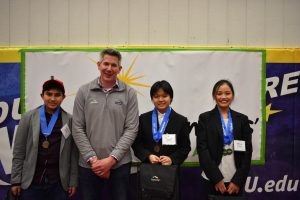 Rachel’s invention focused on helping hospitals overcome the possibility of giving a patient the wrong medicine. Her highly functional robotic system rolls along, reading the RFID cards that are placed outside patients’ rooms. Then, it dispenses the correct medication.

Vikram created an innovative learning hat to help millions of autistic children around the world. The hat has a built-in camera and speaker. The camera is able to recognize certain objects and relay the information back to the built-in speaker. The speaker then says the word to the child on a repetitive basis until it is sure that the child is able to understand and say what he or she is looking at. This will greatly help to reinforce language to the child and help them to develop a larger range of vocabulary faster.

Keynotes From the Young Inventors Program 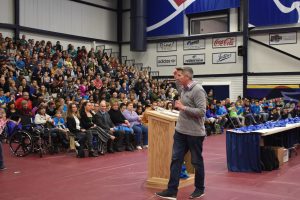 This year, I was incredibly honored and privileged to deliver a keynote speech to the parents and students that attended the Young Inventors Program. I talked about how Topcoder has done a lot of work with NASA over the years and that the one thing that’s always struck me is that, in order to be an astronaut, you have to be really physically and mentally fit but you also have to be an inventor.
You must be willing to try. You have to be comfortable with not winning all of the time. Most of all, you have to be comfortable with failure. You might go out there and try your best and put something out there and put yourself out on the line and you still might get rejected. And chances are, if you are an inventor, you might get rejected over and over again. But the folks that have breakthroughs; the people that change society and have breakthrough innovations, they don’t stop. This is where it begins. This is where these kids will be able to form not only the skills but the grit and the determination early in their life.
Seeing all of the wonderful inventions at this year’s event was truly inspirational. Topcoder is proud to be a continuing supporter of the Youth Invention Program. Congratulations to all of the kids who chose to attend this event and showcase their work. I would especially like to say congratulations to Vikram, Rachel, and Katerina.
We’ll see you next year!

Living the Topcoder Lifestyle YOUR Way