March 7, 2018 The Topcoder Community Predicts the Future of Emerging Technology

As new technologies emerge, questions around automation and artificial intelligence (AI) move further into the spotlight. On average, most people look forward to technological advancements — so long as humans still remain in control, whether as the gold standard or in case of emergency. Last spring, the Pew Research Center surveyed over 4,000 American adults about the future of robots and computers taking on human tasks, most of whom reported doubt rather than enthusiasm (72% doubtful to just 33% optimistic). That said, only 30% thought that their careers could be threatened by robot counterparts.
This spring, we wanted to take it a step beyond asking Americans about their technology hopes and fears in the workforce and government — from concerns over economic inequality to expectations for new, better-paying jobs. We surveyed members of our own global Topcoder Community — our network of more than 1.2 million developers, designers, and data scientists around the world — about the impact of emerging technologies like AI and blockchain on the job market and government involvement.

The Topcoder Community predicts the future

The results were equally surprising and telling, with the majority of respondents expressing excitement about the future of job opportunities in the technology industry by 2030 and a desire for government to get involved in preparing for emerging technologies to disrupt work as we know it.
To reveal the full infographic with all of our findings from the recent survey, click the image below. (And then, if viewing on desktop, zoom in!) 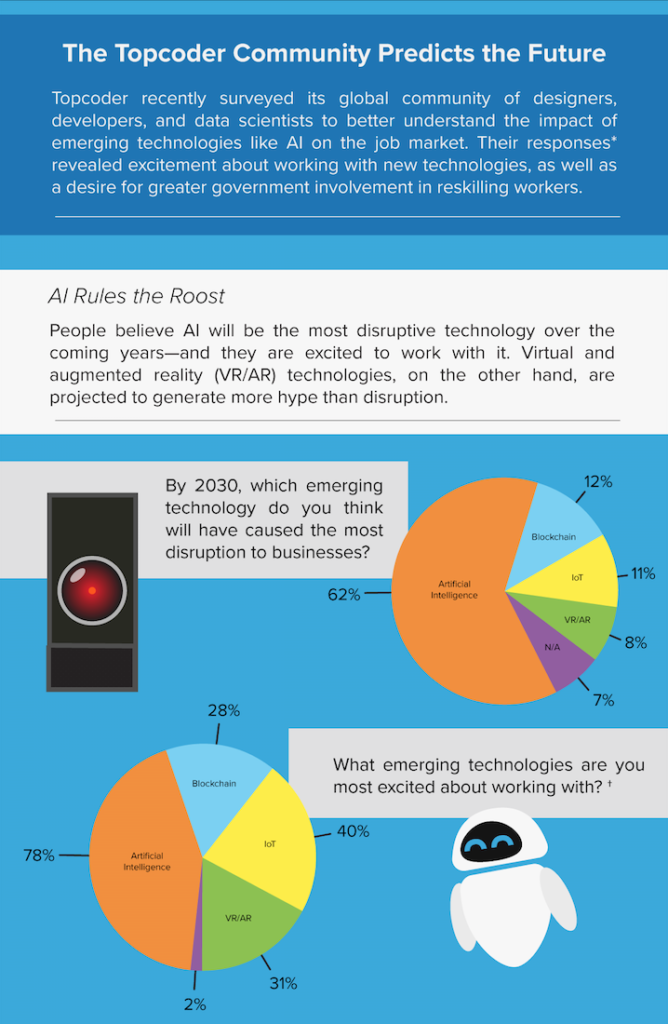 Ready to start your next project with our technology experts?