Why this challenge matters

Treatment of patients with pancreatic cancer continues to pose a formidable challenge. Surgical resection remains the best treatment option. However, the definition of which tumors are considered resectable versus unresectable is quite subjective and dependent on many factors such as surgeon’s expertise and aggressiveness, institutional guidelines, and most importantly, by the amount of tumor contact to adjacent blood vessels. Several groups have tried to develop ways of classifying pancreatic tumors with regard to the chance of successful surgical resection, commonly based on computed tomography (CT) imaging using specific pancreas protocols. Yet, there is a lack of consensus and no single criterion has been adopted as gold standard. To have a clinical tool that could both expedite the identification of pancreatic tumors on CT images and provide an objective estimate of the probability of successful tumor resection would dramatically aid the management decision of such patients. We believe that a crowdsourced innovation solution structured as an online coding competition would be an effective alternative to achieve the proposed goals in a cost-effective manner.

To accomplish this goal, proposed algorithms would have to initially be able to accurately auto-segment the boundaries of pancreatic tumors and 3 major peripancreatic blood vessels [superior mesenteric artery (SMA), celiac axis/common hepatic artery continuum (CA/CHA), and superior mesenteric vein/portal vein continuum (SMV/PV)] (Figure 1) through training based on a set of fully anonymized contrast-enhanced high-resolution CT scans in which tumors and such vessels were previously segmented in detail by a physician with expertise in the field (Figure 2). 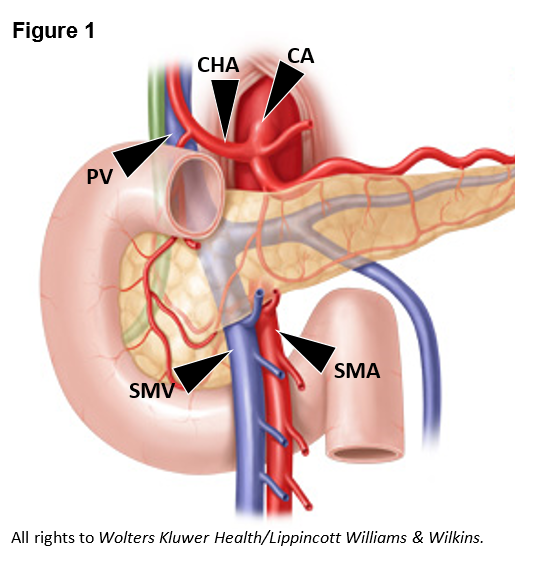 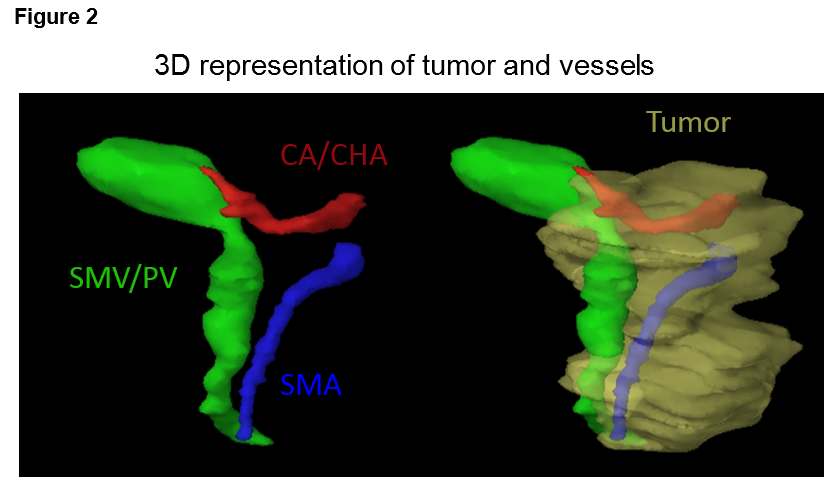 In more technical terms, your task will be to extract polygonal areas that represent tumor regions and blood vessels from CT scan images. The polygons your algorithm returns will be compared to ground truth data, the quality of your solution will be judged by how much your solution overlaps with the expected results, see Scoring for details.

In this task you will work with anonymized CT scans. Data corresponding to a scan is made up of 3 components: it consists of several images (which represent horizontal cross sections, slices of the human body), textual metadata that gives information on how to interpret the image data (e.g. how to translate pixel coordinates into physical coordinates), and ground truth annotations of region contours that describe tumor regions and vessels within the images. Region contour annotations are present only in the training data and removed from provisional and system testing data.

Data corresponding to a scan is organized into the following file structure:

The 3 data components of a scan are described in more detail below.

Scan slices are grayscale PNG images with 16 bit per pixel color depth. Most image viewers can display only 8 bit per pixel PNG images. We recommend that you use the visualizer tool that comes with the challenge to look at the scans.

The number of images per scan varies between 39 and 809 (inclusive). All images in this contest will be of size 512x512 pixels.

Metadata are described in a CT_Image.txt file, which gives the number of slices this scan contains and the conversion ratios between pixel space and physical space.

The location and shape of known regions on images are referred to as ‘ground truth’ in this document. These data are described in text files. Note that contour descriptions are present only in the training data. The name of such files are in the form

where <slice_id> references an image of the scan and <struct> references a named structure that a radiologist marked up on the image.

In this contest the most important structures are named “Tumor”, these are the pancreatic tumor regions that your algorithms must learn to identify. In the current contest you can assume that each scan contains at least one tumor region.

The contour definition files describe the regions of interest as polygons, by enumerating the polygon's vertices, one per line. Vertex coordinates are given in pixel space, {X=0,Y=0} is the upper left corner of the image, the X axis is directed to the right, the Y is directed downwards. The points may be listed either in clockwise or counter-clockwise order within the scan's plane.

An additional piece of information about tumor structures is available for most (but not all) of the scans: a seed point. Seed points do NOT represent the center of mass of a tumor, you can only assume that they are located within a tumor region. During inference this point (if given) can give your algorithm a hint of the location of the tumor. The seed point is described in a file named Structure_Tumor_Center_Pixel.txt in a self explanatory format. The x and y values represent pixels, the z value represents scans.

It is recommended to verify the integrity of the large files before trying to extract them.

Your output must be a CSV file where each line specifies a polygon that your algorithm extracted as a tumor or vessel region. The required format is:

Where <scan_id>, <slice_id> and <struct> are the unique identifiers of a scan, an image slice, and a structure type, respectively, as defined in the Input Files section above. (Angle brackets are for clarity only, they should not be present in the file.) As is the case with contour definition files, the x and y values should be given in pixel space. The ground truth contour definition files contain only integer x and y values, but in your output you may use real numbers.

The polygons need not be closed, i.e. it is not required that the first and last points of the list are the same.

Your output must be a single file with .csv extension.

Your output must only contain algorithmically generated contour descriptions. It is strictly forbidden to include hand labeled contours, or contours that - although initially machine generated - are modified in any way by a human.

This match uses a combination of the "submit data" and "submit code" submission styles. In the online submission phase your output file (generated off line) is compared to ground truth, no code is executed on the evaluation server. In the final testing phase your training and testing process is verified by executing your system.

The required format of the submission package is specified in a submission template document. This current document gives only requirements that are either additional or override the requirements listed in the template.

During scoring, your solution.csv file (as contained in your submission file during provisional testing, or generated by your docker container during final testing) will be matched against the expected ground truth data using the following method.

If your solution is invalid (e.g. if the tester tool can't successfully parse its content, or it violates the size limits), you will receive a score of -1.

If your submission is valid, your score will be calculated as follows:

First for each scan of the test TP (true positive), FP (false positive) and FN (false negative) values are calculated for those slices where either ground truth regions are present, or regions extracted by your solution are present, or both. Here

The above is calculated separately for the 4 structure types (Tumor, CA_CHA, PV_SMV, SMA). An exception to the above rule marked in italics is the following: vessels are contoured in the ground truth only on slices that contain also tumor regions or are close to such slices containing tumor regions. This means that you may correctly find vessels elsewhere but there are no corresponding ground truth annotations. These won't count as FP: for vessels FP is counted only on slices that actually do contain ground truth contour annotations of the same vessel type.

These areas are then summed up for each scan, this gives the total TP, FP and FN numbers for the scan, separately for each of the 4 structure types.

Then 4 F1-scores are calculated using these 4 sets of TP, FP and FN numbers:

Finally the average of such scan scores are calculated, and for display purposes scaled up to the [0...100] range.

For the exact algorithm of the scoring see the visualizer source code.

This section details the final testing workflow, and the requirements against the /code folder of your submission are also specified in the submission template document. This current document gives only requirements or pieces of information that are either additional or override those given in the template. You may ignore this section until you decide you start to prepare your system for final testing.

Requirements to Win a Prize

In order to receive a final prize, you must do all the following:

Achieve a score in the top five according to final system test results. See the "Final scoring" section above.

Once the final scores are posted and winners are announced, the prize winner candidates  have 7 days to submit a report outlining their final algorithm explaining the logic behind and steps to its approach. You will receive a template that helps when creating your final report.

If you place in a prize winning rank but fail to do any of the above, then you will not receive a prize, and it will be awarded to the contestant with the next best performance who did all of the above.