The Match started in an incredibly fast tempo, if we compare it with running competitions. A few contestants easily achieved scores that were, by my estimations, higher than the theoretical upper bound for maximum score. An accidental bug in my own solution that was not caught by a testing software changed the duration of the match rapidly. The problem was that the tester lacked an equals method override in one of its helper classes, thus the supposed validation for stitches on the back side being longer than 1 unit, never worked. The issue was reported to admins, who fixed it quickly, and on Saturday, March 4 the patch was ready and put into the competition environment.
The fix caused an improved submission of one of the leaders at that moment, Stonefeang, to be put at the bottom of the leaderboard. His score dropped from 591,635 to 0 and he decided not to continue to participate in this match after this. There was a short forum discussion on this topic.
The leader, wleite, decided to submit a solution that obeys the missing rule, getting 507,839 points on the provisional scoreboard.
A re-judgement was made for all the latest full submissions of participants on the next day, March 4. Some former leaders got 0 scores as well.

After the scores were re-calculated, hakomo made his first submission. This placed him on top of the leaderboard with a score of 513,699. The pursuiters, wleite and me, had 509,643 and 511,460, respectively.
2 days later, on March 7, hakomo submitted the second and last time for this match. This solution, scoring 514,758, secured him strong lead until the match ended.

mugurelionut deserves a special note here, as he continued to improve his solution right until the 2-hours were left in the contest, probably he could submit again, but decided not to risk it. Let me remind that the risk with last-minute submit is that in case it is worse than previous solution, you have no extra opportunity to rollback it, as the 2 hours between full submissions rule comes into play. The last provisional score of mugurelionut is 514,081, and it gave him 2nd place on the provisional leaderboard, however, H_a_s_h with 513,988 points is very close.
The pre-final leaderboard looks like this. 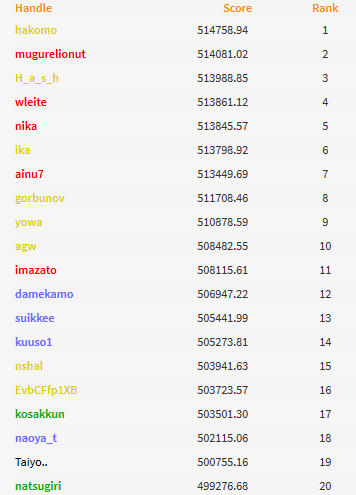 In total, 70 programmers made a successful attempt to solve the task, by doing a full submit and getting non-zero score. The number of registered participants was much higher, totalling 178. Eight competitors made only an example submission, meaning that their rating will be updated and they will be placed lower than those who made a full submission. Note that it is possible to use the offline visualizer to do at-home testing. The example submissions are needed to validate the results of local testing and perhaps to calibrate the C++ Wall clock.
I managed to count 11 Marathon newcomers who got a positive score. Well done for them all, especially to Taiyo.., who finished in top-20.
This was the last regular Marathon Match before the TCO rounds, so check the schedule for TCO Marathons and see you!

2021 TCO Algorithm Round 2B Editorials

2021 TCO Algorithm Round 2A Editorials